From Helth Resort and National Park to Major Cities

In the northwest lies the state Lower Saxony Germany or as the German’s say Niedersachsen. By land size and population it takes the fourth rank within the sixteen federal states. It's state capital is Hannover. 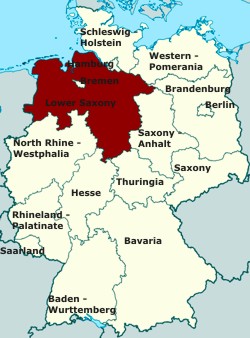 Regions of particular interest to tourists are correlated to twenty percent land designated to national parks and nature reserves. Widely known are:

A mesmerizing region that draws visitors into its ban is found in East Frisia or Ostfriesland. A vast flat plain stretches in the northeast. Primarily used as farmland eyes catch lazy grazing cows as far as they can see. Small picturesque villages and farmhouses add to the scene. A view, that familiarizes with the main economic source cattle farming.

Soon the plain extends into Frisian coastal scenery at the North Sea. Separated by mudflats, seven islands follow the coastline. The Frisian Islands Juist, Norderney, Langeoog, Baltrum, Borkum, Spiekeroog, Wangerooge are recognized health resorts and are part of the protected Wattenmeer National Park between the Ems river and Elbe river.

A very own attraction presents the Lüneburg Heath Nature Pak or Naturschutzpark Lüneburger Heide. Common heather covers the largest German heathland are. In late summer the blooming shrubs colour the hills in mauve. The Heidschnucken, a breed of sheep, manage the grazing resistant shrub. Together their captivate charm appeals to holiday-maker.

Once, in medieval times the area around Lüneburg was covered in forests and swamps. Mining salt and trading salt brought wealth. Side effects were extensive tree logging to lit fires for salt production and overgrazing through farm animals. Over time the appearance around Lüneburg changed and heather replaced the forest.

The Harz Mountain is part of German’s central highlands. Thuringia borders to the south. To the east the Harz extends to Saxony-Anhalt. Historic significance followed silver findings. Recognition by UNESCO as one of the World Cultural Heritages received the Rammelsberg Mine in Goslar.

Upper Harz and Lower Harz make up the Harz. Distinct to the Upper Harz are fir forests on a higher altitude than the Lower Harz. There meadows alternate with deciduous forests.

The Harz National Park offers a walking and cross country paradise with 8.000 km paths and 500 km trails on more than 2,200 square kilometres.

A state filled with natural protected gems in varying settings from coast, plains, heathland to highlands, mixed with a wealth of legends and history have many reasons to further explore the state of Lower Saxony Germany.

Are you travelling German Cities?

Share your City travel experiences! Personalize your page within German-Cities.com with up to four photos!

Go back from Lower Saxony Germany to Hannover Germany.
Return to home of German Cities.